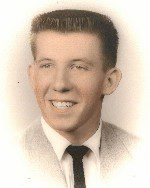 Print Obituary
Robert C. “Bob” Busch, 80, of Smithton, IL, born to Robert W. and Loretta, nee Hasenstab, Busch, on March 2, 1937, in Belleville, IL, passed from this world to the next on Wednesday, October 4, 2017, at his home in Smithton, IL. Into the intervening 80 years, he packed a full and well-lived life.

Bob graduated from Belleville’s St. Peter’s Cathedral Grade School in 1951 and from Cathedral High School in 1955.  Loving sports, he lettered in baseball, football, and basketball in high school.  He joined the U.S. Navy in 1956 and married Karen, nee Daesch, Busch, on June 13, 1957 at St. Mary’s Catholic Church in Belleville, IL.  They promptly left for Norfolk, VA, where he was stationed.  The first of their four children, their daughter, Christine M., was born at Norfolk General Hospital.  Their sons, Robert F., Michael A., and Charles W., were born at St. Elizabeth’s Hospital in Belleville.  Bob was a very good and loving husband and father.

He played baseball in the Navy and continued playing ball for several years locally in the Mon-Clair League.  He also enjoyed softball, cork ball, bowling, hunting, fishing, boating, and the occasional tennis match.  Many were the float trips and camping trips on the Current River, as well as the trout fishing trips at Bennett Springs, MO.  Bob did NOT enjoy golf and cut his golf “career” short at two months.  He wife often joked that if crocheting were a sport, he’d certainly have crocheted competitively.

Bob worked at a variety of jobs, from grocery clerk to welder, to expediter, to machine operator, to commercial fisherman, but the “job” he enjoyed most was coaching kid’s baseball, having coached Khoury League baseball, American Legion baseball, and Little League football.

A parishioner of St. John the Baptist Catholic Church in Smithton, IL, Bob was a member of the Holy Name Society and the Knights of Columbus.  He was an Associate of the Adorers of the Blood of Christ in Ruma, IL.

He is preceded in death by his parents, Robert W. and Loretta, nee Hasenstab, Busch; his grandparents, Robert and Celeste Busch, and Charles and Anna Hasenstab; his father-in-law and mother-in-law, Floyd and Mathilda Daesch; and many aunts; uncles; and cousins.

Memorials may be made to Hospice of Southern Illinois, whose care and comfort were beyond our expectations. Condolences may be expressed to the family online at www.rennerfh.com.

Visitation:  Friends may visit with the family from 9 to 11 a.m. Saturday, October 7, 2017, at St. John the Baptist Catholic Church, Smithton, IL.

Burial of cremains with honors will be at St. John the Baptist Catholic Cemetery, Smithton, IL.