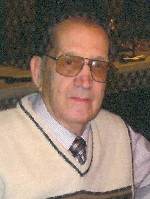 Bob grew up in St. Louis, MO, attended McKinley High School, and served in the U.S. Navy.  He began working in the grocery store business after returning home from service.  He worked for the Kroger Company in St. Louis, as an assistant manager at Centreville Tom Boy, and as a produce manager at Keck’s Super Market in O’Fallon, IL.  He then became a co-owner of Edgemont Super Market in East St. Louis, IL, and the Park Street Mini Mart in Waterloo, IL.

In 1982, Bob moved to San Antonio, TX, and was a manager for the Albertson’s super market chain.  He returned to the Belleville area in 1986, obtained his real estate sales license and insurance license, and worked in the Steve Knapp and Dave Slimack State Farm Insurance Agencies.  After his retirement, he worked part-time as a driver and activities assistant at St. Paul’s Home, and thoroughly enjoyed every day there.

He enjoyed watching Cardinals baseball, his old cowboy shows, trips to the casinos, trips with the Retirees Club, and going to auctions.  Bob never met a stranger and will be sadly missed by family, friends, and everyone who had the pleasure of knowing him.

Memorials may be made to Christ United Church of Christ, to the Belleville Area Humane Society, or to the charity of the donor’s choice.  Condolences may be expressed to the family online at www.rennerfh.com.

Ellen, Deeply saddened to hear of Bob’s passing. My thoughts and prayers are with you and your family.

Ellen,
Our condolences to you and your family. Bob will be greatly missed. You are in our thoughts and prayers.
Len and Jan peak

Our condolence to the Family. My Father (Gil Schaub). Brother (David E Schaub) and I worked with Bob at Centerville Tomboy Store. We all enjoyed working with Bob everyday.