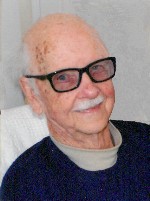 Mr. Doughty was a graduate of Southern Illinois University Edwardsville and retired from the Olin Corporation.  He was a U.S. Army veteran.

Bob was a very devoted family man.  He loved spending many days at his grandchildren’s ball games, dance recitals, band concerts and scouting activities.  He was just a fun-loving grandpa.

He was preceded in death by his parents, Clifford and Nellie, nee Craig, Doughty; and a son, Mark Doughty.

Burial will be at Mount Evergreen Cemetery, Millstadt, IL.

Neal, Randy and Mike, My deepest sympathies to you and the family. Your dad was a great man and I know you will miss him dearly. He and your mom put up with us crazies in high school and even let us in your house!
Fun Times!

Neal, Darya and family, our sincere condolences for the passing of your father…behind every tear of grief, hides a smile of remembrance….I wish you all the strength you need in these difficult times…Anja & Johan.

Rachel, Mike and the entire Doughty Family, my deepest condolences for your loss.