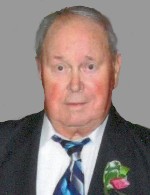 Mr. Guithues was a self-employed carpenter and painter and had been a proud member of the painters and carpenters unions.  In addition, he had worked as a deputy sheriff for St. Clair County, IL.  He had also worked at Fairmount Race Track and at Touchette Regional Hospital in Centreville, IL.

Robert was a member of St. Nicholas Catholic Church, O’Fallon, IL, and was a 4th degree member of Knights of Columbus O’Fallon Council 4239.

The Guithues family extends a special thank you to Bob Hardy and to Glenn and Kathy Loyet for all their help.

In lieu of flowers, memorials may be made to St. Clare Catholic School Endowment Fund or in the form of Masses for Robert Sr. and Angela Guithues.  Condolences may be expressed to the family online at www.rennerfh.com.

So sorry to hear .He will be missed by all his family and friends

I have such fond memories of Bob and our family get-to-getters, and with Beautiful Angie. There is comfort in knowing they are together with Christ whom they loved. Love you in Christ, Aunt Bert

I lived down the street from the Guithues family on Goelz Drive in East St. Louis in the 50’s and early 60’s. Many happy memories of those times. I am so sorry for your loss.