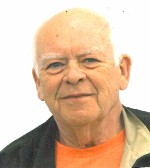 Bob grew up in East St. Louis and attended St. Elizabeth’s Grade School and Assumption High School.  His family moved to Belleville where he graduated from Althoff Catholic High School.

Bob went on to marry the love of his life Martha and raise a family, while working full time and going to school at night.  He graduated from the University of Missouri, St. Louis with a B.S. degree in Organic Chemistry.  He worked for 40 years as a process chemist at Mallinckrodt in St. Louis.  He held 26 organic chemistry patents for Mallinckrodt Pharmaceuticals.

After retiring in 2009, Bob never slowed down.  He continued to be active playing golf, working out at the YMCA, and dancing with Martha.  He loved the outdoors, especially hiking with Martha in National parks.  He even chopped his own wood for his wood burning fireplace.  His talent for chemistry extended into the kitchen.  He was an excellent cook and his family referred to him as the Grill Master.

He loved God and lived his life that way.  He gave of his time and talents to his community.  He was an active member of Our Lady Queen of Peace Church in Belleville where he sang in the choir for 35 years.  He volunteered at the Inner Faith Food Pantry in Belleville and made chili and soup for the poor.  He donated blood to the Red Cross on a regular basis.

Most of all, Bob loved spending time with his family and grandchildren.  He was the rock of our lives, always strong and level headed.  We knew we could count on him for anything. There wasn’t anything he couldn’t fix or a problem he couldn’t solve. He took care of all of us.  Bob loved his family and most of all he loved Martha.

Bob was preceded in death by his sister Carol Marie Halvachs; his father, Robert Elmer Halvachs; and a step-father Frank Keeser.

The Halvachs family would like to thank the physicians and staff of Memorial Hospital in Belleville, IL, and Barnes Jewish Hospital in St. Louis, MO, for their excellent and compassionate care.

Memorials may be made to Our Lady Queen of Peace Church or to the Community Inner Faith Food Pantry. Condolences may be expressed to the family online at www.rennerfh.com.

Funeral:  A Mass of Christian Burial will be held at 11 a.m. Wednesday, August 23, 2017, at Our Lady Queen of Peace Catholic Church, Belleville, IL, with Father Matthew Elie officiating.