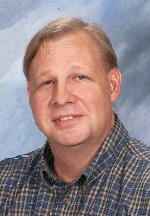 Mr. Hoffmann worked as a machinist assembler for the Beno J. Gundlach Machine Company, Belleville, IL. He was an active life member in the Boy Scouts of America. Bob was a member of the Second Generation Swing Band musical group.  He was a member of St. Teresa Catholic Church and an usher and volunteer at the church.

Robert was preceded in death by his parents, Cyril and Lenora, nee Kaiser, Hoffmann; a brother in infancy, Stephen Hoffmann; two brothers, John F. Hoffmann, and Richard Hoffmann; a niece; and a nephew.

Memorials may be made to St. Teresa Catholic Church, Belleville, IL. Condolences may be expressed to the family online at www.rennerfh.com.

According to Robert’s wishes, his remains were donated to Saint Louis University School of Medicine, St. Louis, MO.

Bobby….you were always such a good friend to our family growing up. May you Rest In Peace…God Bless

Bob, there just are no words to express how sad I am that you are gone. I am so sorry that I lost touch. Joe, and all of your family, please accept my most sincere condolences. Sherry