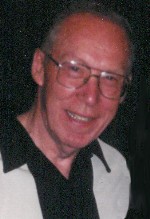 Mr. Jokerst worked as an installer and tester of navigation systems at McDonnell Douglas (MAC).  He was a USMC veteran.  He served in the Korean War with a rank of Staff Sergeant.

Mr. Jokerst was preceded in death by his wife, Rosemary, nee Greene, Jokerst; and his parents, Henry E. and Helen, nee Boyce, Jokerst.