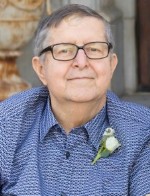 Mr. Kalert was a welder and retired from Towers Fire Apparatus after 40 years of service. He also served in the U.S. Army Reserves for 8 years. Robert was a member of Our Lady of the Snows Catholic Church, Belleville, IL.

He was preceded in death by his son, Gene Allan Kalert; his parents, Joseph and Margaret, nee Adams, Kalert; a grandson, Matthew Orlet; a great-granddaughter, Hallie Orlet; and a brother-in-law, Richard Inman.

According to Robert’s wishes, cremation services were held.