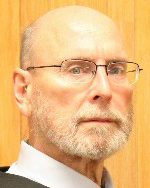 A lifelong resident of St. Clair County, Bob graduated from Althoff Catholic High School in 1970, and three years later obtained a Bachelor of Science in Administration of Justice from SIU-C. He proudly entered Southern Illinois University School of Law and graduated with its first class of distinguished alumni in 1976. He then embarked on an esteemed legal career. From 1976 to 1980, he served as an Assistant State’s Attorney in St. Clair County and then joined his brother in private practice at LeChien & Associates. In 1985, he founded the Consumer Law Center where he undertook precedent setting cases which continue to provide protection for homeowners today.

In 1987 Bob began thirty years of dedicated service to the bench when he was appointed as Associate Circuit Judge of the Twentieth Judicial Circuit.  Judge LeChien was elected as Resident Circuit Judge of St. Clair County in 1998, and most recently was re-elected to that position in 2016. He will be remembered not only for his respect for and dedication to the law, but for the empathy he showed to those who appeared in his courtroom.  Those many years ago, he took an oath to support the constitutions of the United States and the State of Illinois and to faithfully discharge his duties as a judge of the St. Clair County Circuit Court according to the best of his ability. Every day he worked to uphold that oath and continued to serve as an honest servant of justice to the people of St. Clair County and the State of Illinois until the time of his death.  He was a member of the Illinois Judges Association, the Illinois State Bar Association, a Senior Counselor of the St. Clair County Bar Association, and past President of the East St. Louis Bar Association. He was also a lifetime member of the NAACP and a committed Democrat.

Bob was known for his appreciation of music, art, literature, and politics, as well as for his legendary cooking skills.  His intellect, keen wit, and abiding compassion will forever resonate.  He held his family and friends close, and as our judge, friend, and Pappy, he will be dearly remembered.

He was preceded in death by his parents, Eugene H. and Agnes C., nee Appel, LeChien; a brother, Eugene A. LeChien; and a niece, Jeane Marie Elliott.

Memorials may be made to the Honorable Robert P. LeChien Scholarship Fund and may be received at the funeral home.  Condolences may be expressed to the family online at www.rennerfh.com.