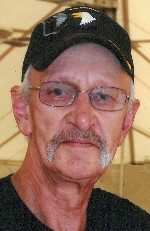 Bob served in the United States Army and was a veteran of the Vietnam War. He was a laborer for many years and retired as a custodian. Bob was a lifetime member of the Franklin PTA. Bob was very involved in everything his girls did and was a Marilyner’s Dad. He coached baseball in his early years. He also coached his daughters’ sports teams, including softball at Belleville Khoury League and soccer at Bel-Clair. Bob loved watching his grandkids play sports. He loved to fish and took great pride in teaching his grandkids how to bait their own hook, catch fish and clean them as well. Bob was the kind of person that would give you the shirt off his back. He never met an enemy and loved helping people in any way that he could.

He was preceded in death by his parents, Adolph H. and Sudie, nee Shell, Niemeyer; a brother-in-law, Dennis Juenger; a sister-in-law, Bev Juenger; and his father-in-law and mother-in-law, Walter E., and Dorothy E. Juenger.

Memorials may be made to the charity of the donor’s choice or to the family, in care of Darlene Niemeyer. Condolences may be expressed to the family online at www.rennerfh.com.