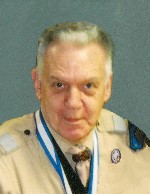 Mr. Noonan was a retired electronics technician for Siemens Manufacturing Co. He was a veteran of both the United States Marine Corps and the United States Air Force.  He served in both the Korean Conflict and in Vietnam.  Robert was a member of Union United Methodist Church, Belleville, IL.  He was also a member of American Legion Post 58, Belleville, St. Clair & Monroe Voiture 926 40-8, and Boy Scouts of America Trails West Council.

Memorials may be made to the American Diabetes Assoc. or to the Boy Scouts of America.  Condolences may be expressed to the family online at www.rennerfh.com.

Michelle and Todd and all the family. We are sooo sorry to hear about your Dad. May he rest in peace …….he will always remain in your heart and memories. Love you.

My sympathy to all the family. I remember Bob from Union Church,aand the Scouts and when he worked in the GourtHouse. He was always a fine Gentleman. God bless you all.

he was so patient and so kind. I will miss him very much. He was a very good man. I just loved him. kim

Bob was a special friend and mentor to me in our association with the American Legion and the Boy Scouts. I could always count on solid advice given with grace and wisdom. His sense of humor ranged far and we could find laughter in some strange circumstances. Although I did not have a recent close relationship, I will miss not being able to reach out. Semper fidelis.