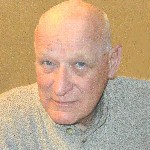 Bob retired from Belleville West High School after 34 years as a teacher/administrator.  He was an avid hunter and enjoyed building and remodeling.  While retired, he and Sandy enjoyed traveling at home and abroad.

He was preceded in death by his father, Robert A. Petri.

Visitation:  Friends may visit with the family from 4 to 8 p.m. Monday, November 13, 2017, at George Renner & Sons Funeral Home, Belleville, IL.