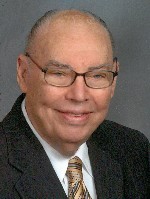 Mr. Pfister retired from Emerson Electric after working 36 years as an electrical engineer.  He was a member of St. Henry Catholic Church, Belleville, IL, and the Holy Name Society at the church.  He also served on the Pastoral Council and on the board of directors at both the St. Henry Creative Learning Center and the Diocesan Board of Education.  Robert was a World War II U.S. Army Air Corps veteran.

He was preceded in death by his wife of 60 years, Charlotte, nee Bauer, Pfister, whom he married October 13, 1951, and who died January 3, 2012; his parents, Carl and Emilie, nee Sauer, Pfister; and four sisters, Elfrieda Liljequist, Carolyn Kazulis, Irma Taylor, and Louise Eddy.

PLEASE ACCEPY MY HEARTFELT SYMPATHY ON THE DEATH OF YOUR FATHER Kathy. I MET BOB BEFORE
HE MET YOUR MOTHER CHARLOTTE MAY – WHO WAS IN MY CLASS AT ST.HENRY’S GRADE SCHOOL! YES, EONS AGO! I AM SORY I CANNOT MAKE THE VISITTATION NOR THE MASS – MY THOUGHTS AND PRAYERS ARE WITH YOU AT THIS SAD TIME BUT I FEEL BOB AND CHARLOTTE ARE NOW TOGETHER AGAIN!

Kathy, so sorry to hear of your dad’s passing!! I remember both your parents quite fondly from our high school days. prayers and prayers for all your family