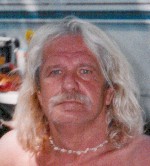 Robert’s grandkids were his rock.  He loved to ride motorcycles and was the MacGyver of anything.  He also enjoyed the outdoors, animals, and cooking.

He was preceded in death by his wife, Eva, nee Biggs, Reilly;
and his father, Robert R. Reilly, Sr.

“It’s wind therapy.  I don’t have spasms when I’m on a bike because the vibration
relaxes my body.”

According to Robert’s wishes, his body will be donated to Saint Louis University School of Medicine.