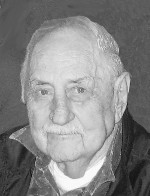 Mr. Sims attended East St. Louis High School, and then served in the United States Navy on the USS Thomas E. Fraser as a communications expert.  Upon returning from the Navy, he met his sweetheart Rose Flak, joined the Catholic Church, and was married at St. Adalbert Catholic Church in East St. Louis, Illinois, on January 13, 1951.

Bob first worked construction, then went to work for Monsanto before finally settling on his 40 year career as an engineer for the Terminal Railroad Association.  In his spare time, he designed, built, and sold houses.  Bob and Rose raised their four children while living life to the fullest through many family vacations, school events, and family gatherings.

After his retirement, Bob and his beloved Rose moved to Bull Shoals, Arkansas, and Bull Head City, Arizona, to enjoy the good times fishing, boating, and playing keno, in each other’s company.  After more than 58 wonderful years, Rose succumbed to cancer in 2009.  Bob moved back to Belleville and spent his remaining years with his family and playing cards with his friends at P.S.O.P.  He was a member of Our Lady Queen of Peace Catholic Church, Belleville, IL.

Besides his dear wife Rose, Bob was preceded in death by his parents, Buster and Chloe, nee Jacobi, Sims; with mother-in-law and father-in-law, Bernice and Stanley Flak; a son-in-law, Macks Shadwick; and a brother-in-law, Stanley Flak.

Memorials may be made to P.S.O.P.  Condolences may be expressed to the family online at www.rennerfh.com.

Visitation:  Friends may visit with the family from 9 to 10 a.m. Saturday July 16, 2016 at Our Lady Queen of Peace Catholic Church, Belleville, IL

Funeral:  A Memorial Mass will be at 10a.m. Saturday, July 16, 2016 at Our Lady Queen of Peace Catholic Church, Belleville, IL with Fr. Matthew Elie officiating.

We send our sympathy to the family snd particularly to Patty. Our though are with you in this hard time.