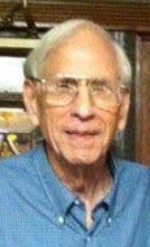 Mr. Ullrich retired as the director of purchasing for Belleville Area College (now Southwestern Illinois College) after 28 years of service.  He had previously worked for the Nestle Company and Emerson Electric.  He earned a bachelor of science degree in business administration from Washington University in St. Louis.  Bob was a U.S. Army veteran.

He was preceded in death by his parents, Jacob W. and Rosa, nee Handrich, Ullrich.

Funeral:  Funeral services will be held at 1 p.m. Thursday at the funeral home with Rev. Herbert Schafale.  Burial will follow at Walnut Hill Cemetery, Belleville, IL.

We will miss you grandpa! 🙁