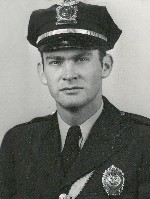 A graduate of McKendree College, Lebanon, IL, and the National FBI Academy, Robert retired from law enforcement after 30 years of service.  During that time, he served with the Belleville Police Department, the St. Clair County Sheriff’s Department as Chief Investigator, and the State of Illinois Department of Corrections.  He was a member of the first Major Case Squad formed in the St. Louis area.  He later worked as a substance abuse counselor.

Robert was a member of St. Peter’s Cathedral Parish, Belleville, IL.  He was a U.S. Navy Korean War veteran.

He was preceded in death by his parents, John and Clara, nee Koenig, Verges; and a sister, Vera Swankhause.

Memorials may be made to St. Peter’s Cathedral.  Condolences may be expressed to the family online at www.rennerfh.com.

On behalf of myself and the rest of the Wilkin family, I would like to express our sincere, deepest sympathies to your entire family at this sad time.