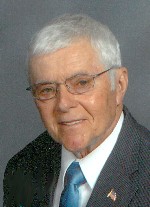 He was preceded in death by his parents, Wayne J. and Marguerite, nee Schrag, Dick; a sister in infancy, Barbara Dick; a brother, William H. Dick; and two brothers-in-law, Thomas and Robert Miller and beloved pet Cheri.

Memorials may be made to St. Paul’s Senior Community, Belleville, IL, or the Belleville Police
K-9 Unit.  Condolences may be expressed to the family online at www.rennerfh.com

Funeral:  A Mass of Christian Burial will be at 10 a.m. Saturday, September 3, 2016, at St. Peter’s Cathedral, Belleville, IL, with Msgr. John Myler officiating.  Burial with military honors will be at Green Mount Catholic Cemetery, Belleville, IL.

Dear Julia, our deepest sympathy to you and your Children on the passing of Bob. He was so dear to write a note to us when you moved to St Paul’s Home.
I know you had a long and loving marriage.
We are remembering both you and Bob in our daily prayers. With love, Susie and Pete Fellner

My fondest memory of Bob is him walking the dog along West Blvd. 🙂 Love and prayers from the Wagner Family.