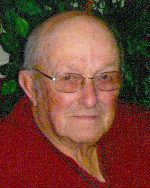 Mr. Weber was raised in St. Libory, IL, and after his marriage to Virginia Hubbard, moved to Freeburg, IL.  He worked for Swift Packing Company and later worked in the trucking industry for Bulk Feed Transport, Behnken Truck Service, and Todd Uniforms.  He was a member of Teamsters Local 50 and Teamsters Local 682. Robert enjoyed bird watching and cutting trees for firewood.  He was an avid fisherman and enjoyed a good fish fry with family and friends.  He was a U.S. Navy veteran.

He was preceded in death by his parents, Bernard and Ida, nee Schoenherr, Weber; three brothers, Norman, Roy, and Roman; and a sister, Lucy Ann.

Burial with military honors will be at St. Liborius Catholic Cemetery, St. Libory, IL, at a later date.