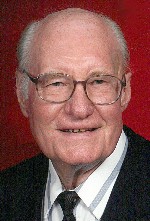 Robert was a 1944 graduate of Freeburg Community High School, Freeburg, IL.  He was a machinist for 45 years, and retired from Ideal Stencil Machine Company, Belleville, IL, after working as a journeyman for 37 years.  Mr. Weiss was a member of St. John United Church of Christ, Smithton, IL, and a former member of the Smithton Historical Society.

Robert’s love for his family came first, followed by his passion for gardening.  He was well-known for Weiss Strawberry Farm, located in Smithton from 1963 to 1973.

He was preceded in death by his parents, Forest and Margaretha Linda, nee Seitz, Weiss; a son, Elton (Sandra Kay) Weiss; a brother, Lester (Rosalie) Weiss; and a sister, Iona (Walter) Schnur.

In lieu of flowers, memorials may be made to St. John U.C.C., Smithton, IL, or to Family Hospice.  Condolences may be expressed to the family online at www.rennerfh.com.