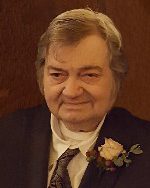 Rolly lived his entire life in Belleville.  He married the love of his life, Ruth, on Valentine’s Day February 14, 1959.  Together they raised five children.  Rolly had a passion for horses.  He raised horses throughout his life.  His greatest pride was the thoroughbred race horses that he raised and raced at Fairmont Park, a passion he shared with his sister and mother.  Rolly was a machinist at Century Brass Works for 38 years when he retired in 2002.  He was a member of the Cathedral Class of 1955 and still enjoyed the gatherings with his classmates.  He was an avid outdoorsman, enjoyed his clubhouse, and liked to go to the casinos.  His favorite place was his family farm that he proudly lived on most of his life.

Memorials may be made to the American Cancer Society.  Condolences may be expressed to the family online at www.rennerfh.com.