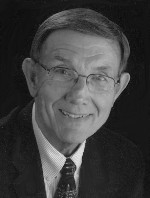 A graduate of Cathedral Grade School and Cathedral High School, he continued his education at Belleville Area College. He worked a successful career in the packaging industry in design and sales which spanned almost six decades, eventually retiring from Boxes, Inc. in St. Louis, MO. He was affectionately known by his friends and customers as the “Box Guy”. His retirement years were enriched putting all his skills to use as he joyfully worked alongside his sons developing Schwartz Brothers Printing. He considered himself incredibly lucky to have lived such a blessed life surrounded by his wife, children, and their families, yet those who knew him were truly the blessed ones to enjoy his quick wit and lively personality. He was passionate about bicycling, often riding several days a week. He and Carol also loved travelling around the world and experiencing everything from European river cruises to Disney World.

He was preceded in death by his parents, Othmar and Ann, nee Krupp, Schwartz; and two sisters Kathleen Whiteley and Janet Docter.

In lieu of flowers, memorials may be made to the American Heart Association or to St. Jude’s Hospital. Condolences may be expressed to the family online at www.rennerfh.com.