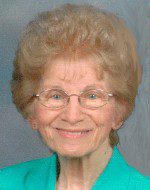 Mrs. Heimrich was a retired homemaker. She also worked as a cashier at Eckert’s Country Store for many years. She enjoyed crocheting, cooking, reading, crafts, and gardening. Rose was a member of Saint Liborius Catholic Church, St. Libory, IL.

She was preceded in death by her parents, Charles and Anna, nee Kisundy, Bozsa; a daughter and son-in-law, Jeanne (Darrell) Guebert; son-in-law, Todd Breitwieser; a granddaughter, Deanna Gavin; and numerous brothers and sisters. ­

Memorials may be made to Saint Liborius Catholic Church, to Freeburg Care Center, or to Family Hospice. Condolences may be expressed to the family online at www.rennerfh.com.