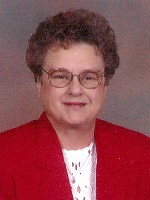 Mrs. Heuer retired from Von Hoffman Press, Inc., St. Louis, MO, as a book binder.  She was a member of St. Mary’s Parish, Belleville, IL, the Daughters of Isabella Circle 329, and the Western Catholic Union.

In lieu of flowers, memorials may be made to the March of Dimes, Southern Illinois Division, 2620 West Boulevard, Suite B, Belleville, IL 62221.  Condolences may be expressed to the family online at www.rennerfh.com.