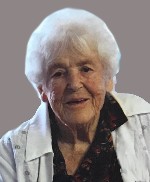 Mrs. Hilpert was a founding member of St. Augustine of Canterbury Catholic Church, Belleville, IL.  She was a homemaker, and a loving wife, mother, grandmother, and great-grandmother.

Memorials may be made to the Alzheimer’s Association or to VITAS Hospice. Condolences may be expressed to the family online at www.rennerfh.com.

Visitation:  Friends may visit with the family from 4 to 8 p.m. Monday, November 27, 2017, at George Renner & Sons Funeral Home, Belleville, IL.