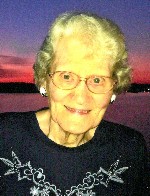 Mrs. Lauzon formerly worked at Eagle Range Company and retired from the Religious Vineyard Supply in Belleville, IL.  She was a member of the Belleville Senior Citizens Club.

Rosella was a member of St. Peter’s Cathedral in Belleville and served as a Eucharistic Minister at the church.

Memorials may be made to St. Peter’s Cathedral or to St. Paul’s Senior Community.  Condolences may be expressed to the family online at www.rennerfh.com.