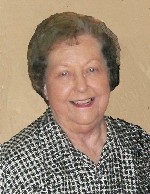 Mrs. Gausepohl was a devoted homemaker who loved to spend time with her family.  She enjoyed photography, traveling, and was an avid painter. She worked at the Armory in St. Louis during World War II.  Later she was employed at the Belleville Shoe Factory, at Princess Peggy Dress Factory for over ten years, and at Robert Hall retail store in East St. Louis, IL.  She was a member of St. Teresa Catholic Church, Belleville, IL.

Rosemary was preceded in death by her husband of 47 years, Walter W. Gausepohl, whom she married on October 26, 1946, and who died on September 18, 1994; her parents, Jerry and Bessie, nee Hrdlicka, Forayt; a brother, Adolph Forayt; and a sister, Georgia Luechtefeld.

Memorials may be made to Hospice of Southern Illinois or in the form of masses. Condolences may be expressed to the family online at www.rennerfh.com.

This wonderful woman will be missed by many people. I’m so glad I had the chance to get to know her. My thoughts and prayers are with her family.

Shirley Schaefer wishes to extent her Deepest and Sincere Sympathy.

She was a wonderful woman, and a great neighbor. So glad we had some time to know her. Prayers for her family. We will miss her.