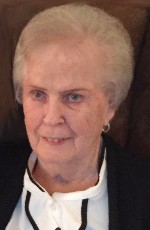 Mrs. Goewert worked as a daycare provider, first at Jack & Jill Daycare, then in her home for her grandchildren. She loved spending time with her family, playing bingo, and playing cards. Rosemary was a member St. Luke Catholic Church, Belleville, IL, and the Shiloh Eagles Auxiliary.

The family would like to extend a special thank you to the staff at Breese Nursing Home for their loving care and concern for Rosemary.