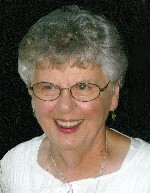 Print Obituary
Rosemary Bertha Wesolik, nee Emge, was born November 29, 1934 in New Athens, IL where she was a lifelong resident, and died on her 84th birthday, November 29, 2018 at Barnes Hospital in St. Louis, MO.

Rosemary lived a life of extensive service to her church and community. She was the Site Manager of the New Athens Senior Citizens Center, where she coordinated Senior activities and the Meals on Wheels program for New Athens Township.  Rosemary then served as a Retired Senior Volunteer Program Director before her retirement. From 1984 to 2016, Rosemary served on the Board of Directors of the Catholic fraternal organization now known as Catholic Holy Family Society (CHFS).   Rosemary and her husband Jim contributed their time and talents, along with their CHFS colleagues, to various Habitat for Humanity projects for over 20 years.Rosemary was a parishioner of St. Agatha Catholic Church in New Athens where she was a Eucharistic Minister and lector. Rosemary was a member of the St. Agatha Council of Catholic Women.  During the 2012 Diocese of Belleville 125th anniversary celebration, she received the Jubilee’s Distinguished Service Award. Rosemary also served as treasurer and St. Agatha’s representative for CESNA, an ecumenical service group in New Athens that extended assistance to community members in need and volunteered at the CESNA Thrift store.  Rosemary was an avid reader and patron of the New Athens Public Library.

Rosemary was preceded in death by her husband of 62 years, James (Jim) Wesolik whom she married on October 15, 1955, and who died on February 20, 2018; and her parents Alvis and Angela, nee Wicklein, Emge.

Memorials may be made to St. Agatha Catholic Church or to Habitat for Humanity.   Condolences may be expressed to the family online at www.rennerfh.com.

Burial will be at St. Agatha Cemetery, New Athens, IL.