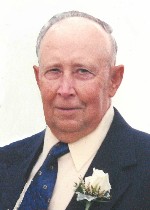 Roy was a retired farmer and a long time official for Prairie du Long Township.  He was a member of the St. Clair County Farm Bureau and St. John’s United Church of Christ, Smithton, IL, where he had served on the church council. He was a former Smithton School Board member and Smithton Volunteer Fire Department Trustee.  Roy was an Army veteran having served in Germany during the Korean War.

He was preceded in death by his parents, Louis J. and Elizabeth A., nee Froese, Skaer; a brother, Curt Skaer; a sister, Doris (Grover) Carr; a sister-in-law, Agnes (Walter) Frierdich, two brothers-in-law, Dan Schneider and Ralph Henss; and his mother-in-law and father-in-law, Frank and Cecilia Schneider.

Memorials may be made to HSHS Hospice of Southern IL or to St. John’s United Church of Christ, Smithton, IL. Condolences may be expressed to the family online at www.rennerfh.com.

Burial with military honors will be at Smithton City Cemetery, Smithton, IL.