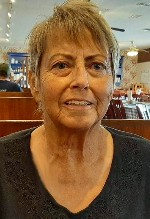 Mrs. Hackleman worked in civil service for the United States Coast Guard for over 30 years. She enjoyed being outdoors, taking care of her garden and her plants. Ruby had many pets and would also feed any stray animal that came her way.

Ruby is preceded in death by her mother, Norma Walters, nee Traywick.

Memorials may be made to the Belleville Area Humane Society, Belleville, IL, or to the Endangered Wolf Center, Eureka, MO. Condolences may be expressed to the family online at www.rennerfh.com.

Private family services will be held at a later date.