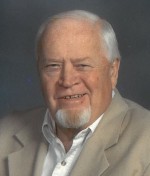 Mr. Blaes retired from Industrial Distribution Group “IDG” in St. Louis, MO, after many years working in their sales department. Russ was a member of Blessed Sacrament Catholic Church, Belleville, IL where he belonged to the Men’s Club and served as an usher.  He was a United States Army Veteran, having spent military time in Korea.  Russ was at one time an avid bowler, having bowled two AVC 300 games and one 299 game.  He was awarded many prizes, trophies and league championship tournaments.

He was preceded in death by his parents, Otto and Malinda, nee Jung, Blaes; and two brothers, Robert Blaes and Fr. Donald Blaes.

Surviving are a sister, Carol Blue of Belleville, IL;
a brother, Dale (Donna) Blaes of Marissa, IL;
nieces and nephews;
and many friends, including his numerous colleagues at IDG.

Memorials may be made to the American Cancer Society or in the form of Masses at Blessed Sacrament Catholic Church, Belleville, IL. Condolences may be expressed to the family online at www.rennerfh.com.

Funeral:  Due to Covid-19 restrictions, a private family service will be held, with a Mass and memorial service to be held at a later date.