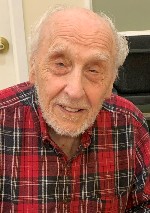 Mr. Lindow was an insurance salesman and retired from Prudential. He was a United States Army veteran. Russell enjoyed gardening and spending time with his family.

He was preceded in death by his wife of 73 years, Barbara Jane Lindow, nee Bedel; a son, Mark Lindow; his parents, Carl and Matilda, nee Stetzner, Lindow; a great-grandson, Andrew; and two sisters, Rita (Jim) Saia and Dorothy (Cletus) Schlorman.