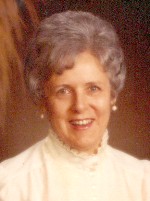 She was preceded in death by her husband of 27 years, Herbert L. Schilling, whom she married on November 28, 1946, and who died on March 29, 1974; her parents, Charles and Anna, nee Zimmerman, Voss; two brothers, Emil (Dorothy) Voss and Orville (Ruth) Voss; two sisters, Alma (George) Engelbrecht and Esther (Theodore) Burgdorf; and two brothers-in-law, John Parker and Wilbert (Rita) Schilling.

Memorials may be made to Zion Lutheran Church.  Condolences may be expressed to the family online at www.rennerfh.com.

Funeral:  Funeral services will be held at 1:30 p.m. Saturday, May 2, 2015, at the funeral home with Rev. Darwin Schrader officiating. Burial will follow at Valhalla Gardens of Memory, Belleville, IL.

My Deepest Sympathy in the Loss of Your Mother & Grandmother, Ruth….
May She Rest in Eternal Peace…
Colleen