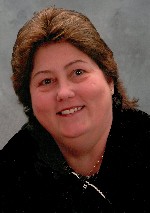 Sally was a true homemaker and her family was her world. The world has lost one of the most loving people anyone could have ever known; an amazing person that words can’t describe. She wasn’t just one thing: a wife, mother, mother-in-law, grandmother, friend, aunt, chef, or peacemaker; she was her family’s everything. Sally was always the first to step up and give a helping hand to anyone. Her world revolved around her children, and even more around her grandchildren. She was at her very best when they were around. Sally was a devoted wife and loved Wayne with all her heart. She will be greatly missed by many and words can’t express the loss that will be felt.

She was preceded in death by her parents, John A. Sr. and Mary, nee Douglas, Barnett; a sister, Linda Schwab; her father-in-law and mother-in-law, John and Mildred Keck; and two brothers-in-law, John Keck and Kenneth Keck.

Wayne, I don’t know if you remember me. I am Ruth’s sister. I was very good friends with your family growing up. I didn’t know Sally, but I do know what pain death brings. Especially of a mate or child. I am so sorry to hear of your loss. I keep thinking of Jesus’s words. “All those in the memorial tombs will hear his voice and come out”. That is a promise we all look forward to being fulfilled. Please accept my sympathy..