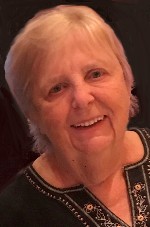 Sandra was a graduate of Mater Dei High School – Class of 1960. She had been a member of St. Peter’s Cathedral Catholic Church since 1965. Sandra loved spending time with her grandchildren and attending their sporting events and activities. She enjoyed musicals at the Muny and Fox Theatre and euchre club with her friends.

Surviving are her husband, Warren Ittner, whom she married on December 29, 1962;
her children, Sheryl Ittner of Belleville, IL,
Gregory (Debbie) Ittner of Bloomingdale, IL, and their children Wesley and Derek Ittner,
and Robyn (Wil) Rao of Naperville, IL, and their children Ethan, Catherine,
Henry and Juliana Rao;
two brothers, David (Margie) Timmermann and Michael Timmermann;
other in laws, John (Dorothy) Park, Margaret (James) Bradford, and Janet Ittner;
and many nieces and nephews.

Memorials may be made to Caritas Family Solutions. Condolences may be expressed to the family online at www.rennerfh.com.