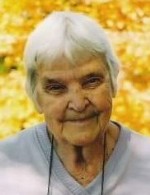 Sarah loved her husband, children, grandchildren, great-grandchildren, and daughter-in-law above all things. When her grandchildren Miguel and Rachel came along, rather than merely being Grandma or Am, she was an afterschool caretaker, chauffeur, personal chef, and irreplaceable friend. Her life changed when, at 86, she became a great-grandmother. Her brood grew through marriage and childbirth, but even into her 90’s she never forgot a birthday.

Sarah’s selfless devotion to family extended to an ever-expanding network of nieces, nephews, Petersen’s, friends, musicians, complete strangers, animals, and general hangers-on who could always count on an open door, a smile, and food on the table. She was known by all for her insistence that everyone get enough to eat, and even after her children grew up and cooking became a chore, made sure to keep a stocked kitchen on the off chance that someone would come by. As a cashier at Belleville Area College, she kept extra change in her pockets in case a student came through her line and could not afford a meal.

If Sarah’s love was family, her passion was the St. Louis Cardinals. She spent countless hours in red, parked in her favorite chair, cheering for (and complaining about) the Birds on the Bat, and loved talking about the game with anyone who had a minute. Even after moving across the country, her son Pat could always count on a late phone call after an especially exciting win. Sarah particularly loved watching Willie McGee and Jon Jay, was proud to share a birthday with Whitey Herzog, and after years of harassment from her grandson, was finally beginning to come around on Matt Holliday. When she wasn’t busy with baseball, Sarah enjoyed listening to Sarah Vaughan and Marylin Maye, drinking coffee from The Abbey, playing Bingo with her friends, scanning the News-Democrat, and spending time with her beloved cat, Willie.

Memorials may be made to Gateway Pet Guardians or to St. George’s & St. Mark’s Food Pantry. Condolences may be expressed to the family online at www.rennerfh.com.

Sarah, a proud and loyal Belleville resident, mother of four and “second mother” to countless others, will be missed by many, but especially by Pat, Jeff, Susan, Nora, Miguel, Rachel, Pamela, Dylan, and Gram. The family wants to thank her friends and caregivers at Memorial Hospital, Terrace on the Park, and Four Fountains for their tireless devotion to Sarah’s well-being and comfort during the past several months.

Funeral:  Funeral services will be held at 11 a.m. Wednesday, June 17, 2015, at the church with Father Dale Coleman officiating, followed by a procession and burial at Green Mount Cemetery and reception at St. George’s. All are welcome to attend the visitation and services, and are requested to forgo the usual attire for St. Louis Cardinals apparel or red and white – the brighter, the better.

Wishing you peace during this time of transition. What a lovely bio — sounds like a life well lived.

our condolences to the family. sorry we can not make it to funern