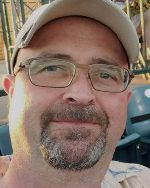 Sean grew up in the New Hampshire town of Claremont where he graduated from Steven’s High School in 1986.  Following his graduation, he joined the Air Force and attended basic training at Lackland AFB. His first assignment was at Pope AFB where he served in the Civil Engineering squadron.  Sean served in several domestic bases such as McGuire AFB (where he met his wife Sue in 1994), and Tyndal AFB in the Red Horse Squadron. He also served two tours of duty during the Gulf War and was located at other overseas bases such as Mildenhall in the UK, Kunsan AFB in South Korea, and had a short stint in Uganda in a humanitarian role.  Throughout his career, he also served as an NCOIC, and finally retired at Scott AFB in 2010 as a Master Sergeant after more than 23 years of service.

Outside of his military career, Sean was an active member of St. Peter’s Cathedral, serving as a lector.  He also was heavily involved in various activities in which his children participated.  Sean was an avid golfer and member of a local golf course and participated in a Thursday league with many close friends.

Sean was a diehard Boston sports fan who relished the multiple championships such as the Red Sox (3 of them), Bruins, Celtics and the Patriots (5 championships – not a typo).

Sean was preceded in death by his mother, Janet M., nee Dubois, Pederson; and both maternal and paternal grandparents.

He is survived by his wife of 21 years, Susan M. “Sue”, nee LaFontaine, Pederson, whom he married on August 24, 1996;
two daughters, Kathleen and Olivia Pederson;
his father, Donald P. Pederson;
and a brother, Christopher Pederson.

Memorials may be made to St. Peter’s Cathedral, to the St. Vincent DePaul Society, or to the Pregnancy Care Center of Belleville. Condolences may  be expressed to the family online at www.rennerfh.com.