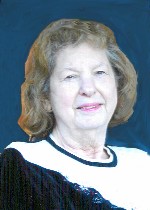 Mrs. Krieg was employed at the former Stix Baer & Fuller department store followed by a lifetime as a wife and mother. She was a member of the Belleville/Swansea Moose Lodge.

Sharon was preceded in death by her parents, Vincent and Emma Marie, nee Outland, Toth.

Memorials may be made to the Belleville/Swansea Moose Lodge.  Condolences may be expressed to the family online at www.rennerfh.com.