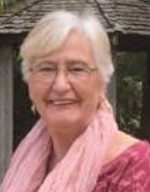 Shirley was a1952 graduate of the Academy of Notre Dame in Belleville, IL. Soon after her graduation, she married the love of her life, Don Deitz, on June 21, 1952.

Through her life Shirley had many accomplishments. She was very involved in the lives of her children and their families. They enjoyed weekly camping trips to Crab Orchard Lake each summer for many years. While they were members of St. Stephen’s Catholic Church in Caseyville, she served as volleyball coach and Girl Scout leader for her daughters’ troops. After moving to Belleville and joining the Cathedral parish, she brought volleyball to the school. She was a stay-at-home mother raising her six children until she started work at the Chancery of the Belleville Diocese. Later she worked as a Ward Clerk throughout St. Elizabeth’s Hospital, spending most of her career in the ICU. After retirement she volunteered with the hospital auxiliary. She loved to sing and was a member of Diocesan Chorale, Metro East Community Chorale, and Cathedral Player’s Guild.

At 45, Shirley fulfilled a life-long dream, acquiring her pilot’s license, and bought her own Cessna 172. She enjoyed flying with family, taking her children and grandchildren out in the Cessna well into her 70’s. She was a dedicated member of the 99’s Women Pilot Association.

Shirley was extremely active in the Belleville community. She was one of the founding members of the funeral luncheon committee, the Funeral Luncheon Ladies at Cathedral parish where she worked with her very dear friend, Janie Riess, bringing comfort to others during their trying times. She also volunteered as a pharmacy assistant at Scott Air Force Base. Shirley was a devout prayer warrior, praying weekly during the night at the Perpetual Adoration Chapel since its conception in 2000.

Shirley was dedicated to her church, her community, and an outstanding, loving matriarch to her family. Her grandchildren will remember her as the “wacky cake” and “ginger cookie” expert who also flew planes in her free time. She was an avid traveler throughout the United States and Europe well into her 80’s. Even in her later years she enjoyed visiting Disney World, riding roller coasters, and zip lining for the first time at the age of 82. She could also be seen cruising around town in her Lincoln with Molly, her beloved rescue dog.

She was a woman of faith who truly believed in living an adventurous life led by the Lord. Shirley will be deeply missed, but when God took her, he said, “Halleluiah, you’re Home!”

The family would like to thank all the wonderful care-givers who assisted with her care and support over the course of her illness.

Memorials may be made in Shirley’s name to St. Peter’s Cathedral, St. Vincent de Paul Food Pantry, or the charity of your choice. Condolences may be expressed to the family online at www.rennerfh.com.