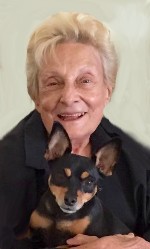 She was preceded in death by her husband of 71 years, Virgil Anthony Eichenseer, whom she married on August 23, 1944, and who died on April 21, 2016; a son, James A. Eichenseer I; a grandson, Jeremy T. Weaver; a granddaughter, Hope Nicole Campbell; her parents, Henry L. and Mary Magdalene, nee Neumayer, Gundlach; two sisters, Evelyn Nester and Rose Marie Gundlach; and a brother-in-law, Harold Eichenseer.

Memorials may be made in the form of masses. Condolences may be expressed to the family online at www.rennerfh.com.