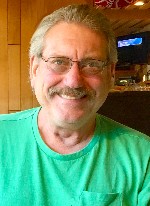 Steve was a man of many talents. He worked as the lead painter at the former St. Elizabeth’s Hospital in Belleville before his retirement. At the young age of seven years old, he taught himself to play the piano. Early in his high school years, Steve learned how to play a Hammond B3 organ, and played with local bands in the area. Later, around the age of 20, he became an accomplished guitar player who played with local bands and also as a soloist in the metro-east area. Music was his greatest joy.

He was preceded in death by his parents, Warren and Thelma, nee Layman, Krug; and a cousin, Don Krug.

According to Steve’s wishes, cremation services were held.

Funeral: A celebration of life will be held at a later date.

Private graveside services will be held at Walnut Hill Cemetery, Belleville, IL, at a later date.