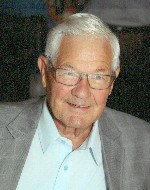 Steve, along with his father and brother, ran the family business, Steve Schranz Trucking, Inc. He worked there for 57 years with his wife Jeanette.

Steve served in the Air Force Reserves, was a member of the Teamsters Local 50 and was a long-time member of Cathedral of St. Peter, Belleville, IL.

He was active in many Cathedral parish activities, including serving as a lector and Eucharistic Minister at Sunday masses. He was devoted to Catholic evangelization programs including Catholics Returning Home, Pre-Cana marriage preparation classes and Baptism preparation classes. He was a regular adorer of the Blessed Sacrament at the Adoration Chapel, St. Teresa’s Catholic Church. Steve completed a Cursillo in Christianity and was active and served as a team leader twice and on many teams for Cursillo. He was a regular volunteer at the St. Vincent de Paul Food Pantry and the Saturday Morning Breakfast at Cathedral. He was a 1st degree member of the Knights of Columbus. Steve was a frequent blood donor and donated 10 gallons of blood through the American Red Cross.

Steve’s hobbies included boating, fishing, traveling, tending his vegetable garden and blackberry bushes, and tinkering around in his garage. He enjoyed attending class reunions with his classmates at Tim & Joes. He was most at home spending time with his wife, Jeanette.

He was preceded in death by his parents, Stephen A. and Mildred A., nee Weissert, Schranz; a sister-in-law, Linda Schranz; and a brother-in-law, Tom Carley.

Visitation:  Friends may visit from 8:30 to 10:30 a.m. Saturday, January 23, 2021, at George Renner & Sons Funeral Home, Belleville, IL.  Standard CDC guidelines, including masks and a limited number of visitors at any one time will be observed.

Funeral:  A Mass of Christian Burial will be held at St. Peter’s Cathedral, Belleville, IL, with Msgr. John Myler officiating. Standard CDC guidelines, including masks and a capacity of 30 attendees will be implemented at the church.