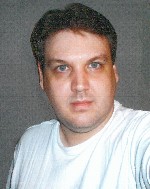 Steve grew up in Belleville, IL and San Antonio, TX.  He attended Robert E. Lee High School in San Antonio.  He was employed with Big Lots Store in Webster Groves, MO.  He enjoyed watching Cardinals baseball, studying astrology and playing D & D and video games with his friends.  He will be sadly missed by family, friends, and everyone who knew him.

He was preceded in death by his father, Robert “Bob” Collins; his brother, Craig Collins; his grandparents, Walter and Marie, nee Ross, Collins, and Charles and Lucille, nee Loos, Hatley.

Funeral:  A celebration of life memorial service will be held at 11:30 a.m. Saturday, October 29, 2016, at Christ United Church of Christ, with Mr. Jon Tinge officiating.  Private burial services will be at a later date.

Ellen,
So much sorrow for you recently. You are in our thoughts and prayers even though we will not be able to be there with you. I am thankful that you have your church family there to support you at this time. God bless you and your family.