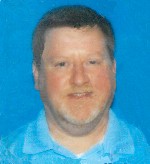 Mr. Haas was an assembler at MAC Medical, Millstadt, IL. Steve enjoyed attending local festivals and parades and listening to bands. He was a fan of local high school football games and especially enjoyed time spent with his niece and nephews. They enjoyed many Cardinal Baseball games together.

Steven was preceded in death by his parents, Henry I. and Marlene H., nee Deichmann, Haas; grandparents; aunts; and uncles.

Memorials may be made to Cardinals Care or to the charity of the donor’s choice. Condolences may be expressed to the family online at www.rennerfh.com.