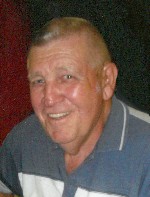 Mr. Jackson was a mechanic for United Parcel Service, St. Louis, MO before his retirement.  He was an avid angler and a member of the Millstadt VFW Post 7980.  Stoney was a U.S. Army veteran.

Memorials may be made to the Disabled American Veterans (DAV).  Condolences may be expressed to the family online at www.rennerfh.com.

Funeral: According to his wishes, cremation was held. There will be no funeral service.

Betty – I am so sorry to heat about Stoney – my thoughts and prayers are with you and all of the family. May the many memories you shared help you through each day.

Mr. Jackson made me smile many times. I only knew him thru Facebook, but I could tell he was a good man. My condolences to his family.
RIP my FB friend.
Elaine

Betty,
My condolences to you and Monica and family.
I know you and Stoney always had a good time together. Hope to see you both soon at the barber shop. My prayers are with you.

Betty,
I just saw in the the freeburg tribune about Stoney. I am so sorry.
You have my sincerest sympathy.
Any thing I can ever do for you or your family you know just ask.