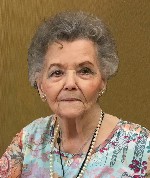 The family of Sula would like to extend a special thanks to Cambridge Assisted Living for the loving care given to their mother, who they fondly referred to as an elegant lady. The family would also like to give special thanks to the nurses on 4 South at Memorial Hospital, Belleville, IL, for lovingly holding her hands as the angels took her into heaven.

Memorials may be made to the Belleville Area Humane Society or to St. Matthew United Methodist Church, Belleville, IL. Condolences may be expressed to the family online at www.rennerfh.com.