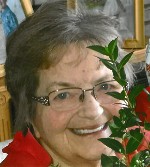 Sue was a homemaker, worked as a cook at the former Schnucks Station Restaurant, and as a bus driver for over 20 years before her retirement. She was a member of St. John the Baptist Catholic Church, Smithton, IL, and the Smithton Senior Citizen Center. She enjoyed playing bingo, card parties with the girls, and going on cruises with her husband to warmer climates.

She was preceded in death by her husband of 52 years, Francis M. Quirin, whom she married on February 16, 1963, and who died on February 22, 2015; her parents, Roy Kennedy and Helen Kennedy Goode, nee Shefko; two sisters, Lois (Carl) Bauer and Carolyn Sansom; and one brother, Robert (Mary Ann) Kennedy.

Should friends desire mass offerings or memorials may be made to St. John the Baptist Catholic Church. Condolences may be expressed to the family online at www.rennerfh.com.

Visitation:  No visitation will be held.

Funeral:  A private Mass of Christian Burial will be held at St. John the Baptist Catholic Church with Rev. Stanley J. Konieczny officiating.

Private burial, at a later date, will be at St. John the Baptist Catholic Cemetery, Smithton, IL.