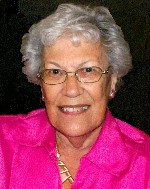 Mrs. Cox was a supportive wife and loving mother. She was a member of Corpus Christi Catholic Church, Shiloh, IL.

Memorials may be made to Cedarhurst of Shiloh, Memory Care Garden.  Condolences may be expressed to the family online at www.rennerfh.com.