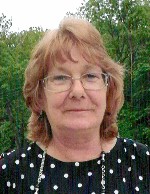 Terri worked for more than 20 years for Target, where she retired as a manager. She enjoyed crafting of all kinds and particularly liked collecting and working on dollhouses. Recently she enjoyed collecting and taking time to watch the fish in her aquariums. Above all else, Terri loved time spent with her family, particularly her children and grandchildren, whom she adored.

She was preceded in death by her parents, William and Ruth, nee Kurtz, Fanning; and a sister, Ruth Ann Sloan.